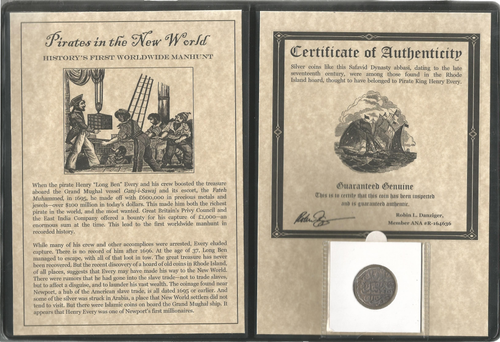 The great Pirate King Henry Every sparked the first worldwide manhunt. Making off with a fortune valued at over $100 million today after pilfering a ship from the East, he was Britain and the East India Company's most wanted man. The Pirate King was never brought to justice, but a hoard of rare old coins from the era, as well as Silver coins like this Safavid Dynasty abbasi, dating to the late seventeenth century, were among those found in a hoard in Rhode Island. The dates and nationality of the coins found match up a little too well with Henry Every's treasure.

It is likely that Every escaped to the New World and settled on Rhode Island along with his enormous wealth. This incredible piece from his supposed Rhode Island hoard is full of history and wonder. This album comes with a detailed story of Every, along with a certificate of authenticity.