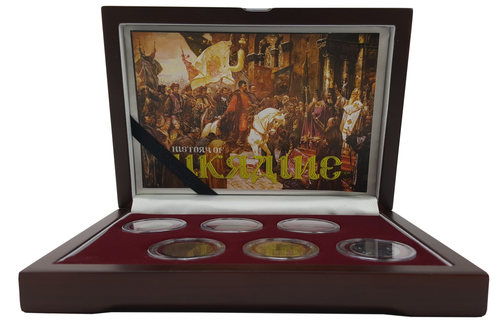 Ukraine's independent culture is derived from its rich history going back centuries. The Kyivan Rus’ was the first Eastern Slavic state. It was formed in Ukraine in the Middle Ages, and by the 11th century was the largest and most powerful nation in Europe! Modern Ukraine's highly literary culture traces its roots to the Kyivan Rus’.

This incredible collection contains a silver 3 polker of Sigismund III Vasa, a copper solidus of John II Casimir, a kopek of Alexis of Russia, a 2 kopek of Nicholas II, the last Romanov, a Soviet 5 kopek from after the Holodomor, and a Ukrainian 5 kopijok, struck in 1992. These coins span from the 13th to the 20th century! Celebrate the incredible history of Ukraine with this fantastic box set!

We will be donating 5% of each purchase to the support humanitarian efforts in Ukraine.