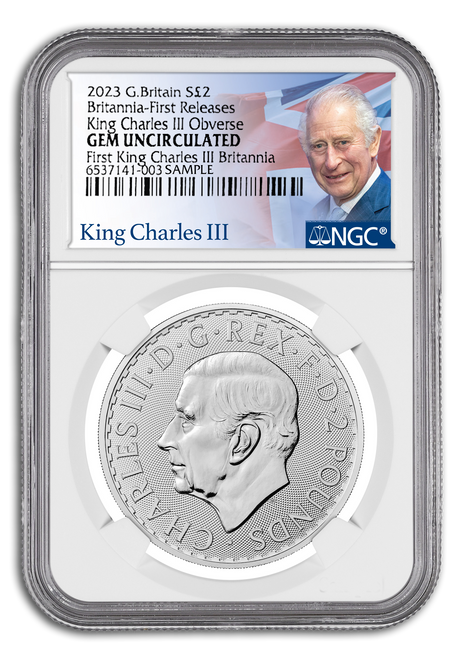 The Silver Brittania coin is the Royal Mint's world-renowned bullion coin. First issued in 1997, it wasn't until 2013 that the bullion issue was struck with 1oz of .999 fine silver. This series has quite the cult following! This year, the first 2023 Britannia release was the final Britannia coin to feature an effigy of Her Majesty Queen Elizabeth II. This obverse featuring King Charles III's first portrait is a landmark piece, as the first coin in the series to not feature the late Queen Elizabeth II.

The reverse features the symbolic figure of Britannia standing firm against a powerful gale. To act against counterfeiting, the incredible design includes a latent image, surface animation, tincture lines, and micro text to create a truly memorable and intricate design! This historic piece has been certified by NGC to be in GEM Uncirculated condition, and it is holdered with a portrait of King Charles III to celebrate this landmark release. Add this important rarity to your collection for cheap!